Skip to main content
To provide you with the best experience, Capitola Venetian Hotel uses its own and third-party cookies on its website for technical, analytical and marketing purposes. By continuing to browse our site, you're agreeing to our use of cookies. Please consult our Cookie Notice for more information.

Its history, its architecture and the lively characters who brought it to the Monterey Bay.

(taken from articles by Charles Rowe) 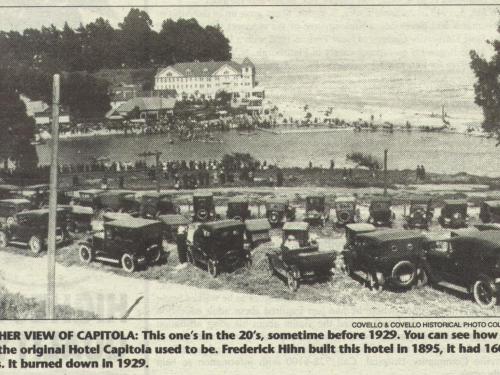 Nestled on the sloping shores of Monterey Bay at the mouth of Soquel Creek, the Venetian Court is flanked by two other local landmarks-the Capitola Wharf and the Stockton Avenue Bridge, both revealing end-view perspectives of this intriguing complex. It is the state’s oldest seaside “condominium” and just about its oldest “motel” operation-both uses occurring before those words became common to the American vernacular. This architectural fantasy is also a key link to the community’s coastal resort history.

When the Venetian Court was dreamed up in the early 1920’s, it was intended to be different and to advance the motif of the new Capitola, which was the domain of H. Allen Rispin.

Old “Capitola” was foundedin 1869 and owned by F.A. Hihn, a leading figure in Santa Cruz history, until his death in 1913. German by birth, Hihn envisioned a European-type spa on the therapeutic, but then barren shores of “La Playa de Soquel”, which, after purchasing, he promptly renamed. Here he built a humble resort consisting of a small hotel, cottages and tent sites.

What is now Capitola Village is recognized by the National Register of Historic Places as California’s first seaside resort. But it didn’t begin to flourish until the enterprising Hihn established railroad passenger service in 1876. For years it was a summer vacation spot for thousands of Central Californians seeking relief from the torrid inland heat. The crowning achievement of the Hihn era was the completion of the 160-room Hotel Capitola in 1895. It was one of the grand hotels of its time and the resort’s flagship.

Through Hihn’s daughter, the town was passed lock, stock and barrel to Rispin in 1919. By all accounts the oil millionaire from Canada was the right man for the times. In Capitola he envisioned a second Venice. He built a 22-room Mediterranean-style mansion with a strong Spanish Colonial Revival influence on the upper shores of Soquel Creek, and then began to make his mark on Capitola. He renamed it, Capitola-by-the-Sea, upgraded utilities, relocated buildings, realigned streets and, more important, began to subdivide and sell residential lots. This gave a new generation of Californians access to coastal property and laid the foundation for a year-round community that would eventually become a city. In 1924 Rispin filed a subdivision titled the “Venetian Court”. It had been occupied for many years by the local fishing industry. In the early 20’s, these shacks were used for scenes in a William S. Hart movie calling for a setting of a coastal village in the redwoods. Upon completion of the movie, (and likely part of Rispin’s cleanup campaign), all this background scenery was literally destroyed, forcing the fishing industry to relocate.

Rispin’s townhouse site plan for the tear-shaped property set out boundaries for four elongated tiers split into an eight-sectioned complex divided by cross-axial walkways. He immediately sold the package to Henry R. Roth, a San Jose realtor who engaged architects Wolfe and Higgins to do the design work. The style was Rispin’s choice-Spanish Colonial Revival with strong Mediterranean influences. The Rispin Mansion (now owned by the city) and the Venetian Courts were the first styling of their kind in the city.

The architects created a functional, yet fanciful work full of pleasant details and imaginative variations. The five original structures (of the eight planned) are of wood frame construction with heavy stucco siding and flat roofs, featuring parapet walls and small towers with pyramidal caps. Small balconies, tile detailing, repeated plaster arches and relief work depicting smiling gargoyles and dolphins add touches of charm and humor. Contemporary pastel paint work boldly distinguishes each unit from the next and adds Mediterranean warmth. Each condominium is designed to be different from its neighbors and, of course, provides an ocean view. The architects met well the opportunities of the site and the challenge of their employer. It remains a curious and singular architectural success.

Opening in 1925, the complex received mixed reviews. The local Sunday newspaper commented cheerfully, “The last installments of the Venetian Court Apartments are about finished and are ready for inspection. They are very pretty just at the edge of the lagoon. The back row is built so one can look over the tops of the others and see the beach.” Other locals, viewing its proximity to the seas, predicted “it will never last” and a fierce winter storm the next year almost proved them right.

When Rispin sold the first unit, it marked the state’s first coastal condominium sale, and probably the first condominium sale in the state. Based on the number of sales Roth made in 1925 and 1926, it was an instant success, according to county records.

One eager buyer was Frank T. Blake, who began assembling the back tier of night and weekend rentals. When he purchased the adjacent lots -- which had been expected to house more Venetian Court apartments -- and used it for a parking lot, he was in the motel business whether he knew it or not.

Although auto courts became common in the area when the Glenwood Highway (now Highway 17) opened in 1923, the term “motel” was born at the same time as Blake’s venture. In 1926 the Motel Inn (still in existence) opened on Route 101 in San Luis Obispo and inadvertently coined the word. The shortened “motor hotel” entered the language and was to outlast its rival the “autel”. Today, the Venetian Court Motel, by whatever name it originally operated under, has been a continuous motel operation since 1926, ranking it with the oldest in the state and nation.

This motel has had a checkered existence following the highs and lows of the time. During the Depression years, it is said to have served as a gambling and sporting house. But like the units below that have withstood the storms, it also has been a survivor. Today, its woodcarved doors depict scenes of Venice told in story and song, and invite but one more generation to be part of the Venetian Court’s history.

Venetian Court remains a vivid and distinct carryover from the Rispin era, which ended abruptly with his bankruptcy and the burning of the Hotel Capitola in 1929 which symbolized the end of the Roaring 20’s and the beginning of the Depression. The resort closed its operation in 1930 and though the 60 years of Camp Capitola ended, the legacy lingers.

The Venetian Court, California’s first condo seaside resort, has been placed on the national Register of Historic Places by the Department of Parks and Recreation.

Editor’s Note: The Capitola Venetian Hotel and Courts are now located where the automobiles are parked in the photo on page 1.
Previous
Next